Over the last year or so I’ve had conversations with several friends that have made tough decisions to get back to basics. To reconnect with what is important in life and trim out the unnecessary baggage that weighed them down. Physically, and emotionally. Baggage like a worrisome work life, tired relationships, stressful situations, or extracurriculars. I admired this way of thinking. I understood it, but never truly identified with it until now. I thought I could relate but now it’s clear: I had no idea what they were talking about until now. For me, if I don’t change the way I operate I’ll self destruct. Yes, as in spontaneously explode into millions of pieces scattered all over whatever room I would happen to be in last. And I am serious. As in KABOOOOOOOM, with the people left behind to pick pieces of flesh out of the crevices of the wee corners of the lamps and detailed crown moulding. (sorry for the visual)

My life is my own. My life is not a constant addition of responsibilities that manifests itself into the new normal. I understand this now, and it took to hit rock bottom to truly understand. At some point even the strongest of intentions can break the spirit, and before it breaks me permanently I need to step back. I’ll return to basics, recharge and focus my energy on what is important in this moment. In this reality. So that when the time comes, my sanity can be restored I can come out better on the other side. Stronger.

To the benefit of all.

Excerpt from the song by the White Stripes:Little Acorns

“When problems overwhelm us and sadness smothers us, where do we find the will and the courage to continue? Well, the answer may come in the caring voice of a friend, a chance encounter with a book, or from a personal faith. For Janet, her help came from her faith but it also came from a squirrel. Shortly after her divorce, Janet lost her father, then she lost her job, she had mounting money problems. But Janet not only survived but she worked her way out of despondency and now she says life is good again. She told me that late one autumn day when she was at her lowest, she saw a squirrel storing up nuts for the winter. One at a time, he would take them to the nest. And she thought, if that squirrel can take care of himself with a harsh winter coming on, so can I. Once I broke my problems into small pieces, I was able to carry them, just like those acorns, one at a time.”

I Am What I ThinkNotes, Thoughts & Personal Expressions 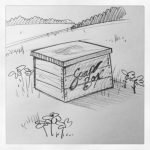