Sometimes the conversations my kids have really make me laugh. Case and point was last Saturday. Aaron was jumping around the house acting like Spiderman. Slinging imaginary webs from couch to couch, from couch to table, table to wall and wall to his brother… then tackle… then wrestle… then repeat.

This sparked a conversation between Joey and Aaron that posed the question of who would win in a fight between Spiderman and Batman. Aaron claims that Spiderman would be easier to kill than Batman. Since Batman has all the toys. (not sure why he was not pretending to be Batman instead of Spiderman) Joey claims that the argument was pointless because any superhero is easy to kill except for Superman.

Joey said “Aaron Batman is just a guy. He has no powers and his batarangs run out. Let’s say he’s fighting the Joker at the Mall…

I interrupted, “Wait, Joey why is the Joker hanging out at the Mall? Is he robbing Banana Republic, or Payless Shoes?” “No Dad, he’s not robbing Payless, he’s robbiing another store…”

Joey went on to say to Aaron, “He throws all three of his batarangs at the Joker, and he misses. Then he has nothing. Spiderman just makes more webs, and can scale walls. You see Aaron, Batman is just a guy with no powers and Spiderman has powers that help him, but really they both won’t survive a bullet to the head. No hero would except for Superman.”

Aaron rebuked, “No Batman can dodge them.”

“You can’t dodge a bullet to the head. Aaron tell me a superhero and I will tell you how easy it would be to kill them.”

After a couple more Joey felt he made his point and I was laughing. A.J. shrugged his shoulders and left the room saying “Eh, Batman would still beat Spiderman.”

Joey chased him… and I am pretty sure Aaron flung some Spidey webs to fight Joey off before he got tackled. 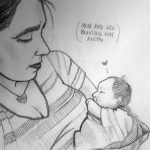 Love at Three SightsMy Little Buddy, My Marsupial, My Sweets