School starts on Wednesday and with it comes bed times, early mornings and mass chaos before the bus clicks on the red lights and slowly comes to complete rest at the new stop. What also comes is an opportunity again to reacquaint the Mayernik household with some normal routines. For me, it’s getting to tuck the kids in at night. With Summer vacation and the house renovations in the mix, normal routines have been smashed into small pieces. Some normalcy would be welcomed in my head right about now.

Nightime rituals have changed over the years from childhood stories, to reading books, bathtime, and heart to heart talks. One thing that has not changed are the prayers and what my kids call the “God Song”. It’s a song by Michael Card titled God’s Own Fool. When my oldest son Joey was a small toddler I got in the habit of singing this song to him after prayers. Naturally, I also sang, and still sing, to Rebekah and Aaron. It has evolved into a nice tradition that I look forward to when I tuck them in. Now at the ages they are at they know the words. They sing along and it makes them smile which in turn makes me smile. The message of the song is clear: Follow God’s own fool.

Most of Michael Card’s songs are a bit preachy for me and they don’t really find their way from the ipod catalog to the earphones, but this one I find to be particularly good. It has a bit of humor disguised in an otherwise preachy message. And that I appreciate. With Joey going into High School this year he has graduated past me sitting by his bed side at night saying prayers and singing the song. He says prayers on his own now. Maybe he sings the song in his head, maybe not. But I am sure it crosses his mind, and I hope when they are blessed with children. they sing the song too when bedtime calls.

The added layer here is that for their First Communion I sang this song for each of them during their services. It was a nice exclamation point to years worth of singing for, and with them. I’m glad I started singing this song so many years ago. I don’t know why or how it started, I’m just glad it did.

In a flash Joey is starting High School. In a flash Rebekah is 5 foot 1. In a flash Aaron is 9. Where has the time gone? I shake my head sometimes at the humor of it all. The first day.. three new schools, new friends, new bus stops, new home… and thankfully holding on to some old favorite routines.

Here are the Lyics to the song in case you are interested:

Gods Own Fool by Michael Card

Seems I’ve imagined Him all of my life
As the wisest of all of mankind
But if God’s Holy wisdom is foolish to man
He must have seemed out of His mind
Even His family said He was mad
And the priest said a demon’s to blame
But, God in the form of this angry young man
Could not have seemed perfectly sane

We in our foolishness thought we were wise
He played the fool and He opened our eyes
We in our weakness believed we were strong
He became helpless to show we were wrong
So we follow God’s own Fool
For only the foolish can tell
Believe the unbelievable, come be a fool as well

We in our foolishness thought we were wise
He played the fool and He opened our eyes
We in our weakness believed we were strong
He became helpless to show we were wrong
So we follow God’s own Fool
For only the foolish can tell
Believe the unbelievable, come be a fool as well 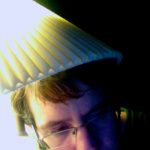