More time out that in. The 1991 Utica Chieftains (from MI not NY) celebrated in relaxed style at Snooker’s Pool & Pub Friday. 20 years out and there is the grim realization that life has battle tested us all. The 20 years have been harder on some, and easier on others. A few faces show the weariness beyond there age. Some look like they just stepped off the podium at graduation. Some classmates are married with kids, some divorced with kids. A few have come out, and some are happy being single. A few were transitioning to new professions while some were still unemployed from a depressed Detroit job market.

In every case, the friendships still persevered. The clicks still intact. I spoke with many classmates that I have not seen since the 10 year, and we picked up right where we left off. It’s funny how life is like that. Despite whatever cards life has dealt us. For 3 hours we forgot about all that was life and were transported back into the band room, to homecoming and prom, on the football field, in AP History, the auditorium at Cinderella rehearsals, and even elementary school, religion class, and recess. I would venture to say that most people needed the time away from life. I would be lying if I said I didn’t appreciate the 3 hour recess.

I looked around the room on Friday and thought to myself “Who was voted most likely to succeed? Did they live up? Who was voted The Prettiest? Well Dressed? Class Clown, Biggest Flirt, Most Intellegent?” 20 years removed do these superficial labels still hold up? I was voted “Most Creative” and “Most School Spirit” My pal Chuck was voted “Most Artistic” I can safely say the two of us have tried to uphold our end of the bargain. Have others? It would be an interesting exercise to revisit that list. I wonder if it’s in the yearbook? (If only I had been voted “Best Memory” Dammit!)

Here are 20 highlights from my 20 year high school class reunion:

1. There were a lot more people there than expected.
2. There were many people not there that I expected to see.
3. Sam’s response to Seth’s question: “So you graduated with us? Why don’t I remember you?” was classic… Sam responded, “well that’s okay I understand that you don’t remember me… I just only gave the commencement speech at graduation.”
4. John saying he was going to leave after 30 minutes and then staying for another 3 hours. I am glad he stayed.
5. Spilling beer and wine on a pool table is not frowned upon by the waitstaff.
6. Everybody loves a raffle. Even though it was B U L L S H I T that I didn’t win.
7. Three vodka martini’s. mmmmm.
8. The twins Todd and Tom’s name tag fight. At one point they read “Not Todd” and “I’m not the gay one.”
9. Reenacting a picture from the 10 year reunion and realizing we are a lot more colorful now. (I hope we all make it to see the 30.)
10. “Snooker’s Pool & Pub” should be renamed to “Snooker’s only 4 pool tables & 200 drinking poker players”.
11. Billy needs to be playing the blues guitar and raking in the cash.
12. Realizing that Dawn has an excellent memory, and maybe loves the Detroit Tigers almost as much, if not more than me. Her 2 boys are on probably cloud 9 since she won two of the Tigers prizes.
13. Chris… “Yeah, I flipped and Alfa Romeo in high school.”
14. Chuck’s artwork is still hanging in the band room. Courtesy of Chris.
15. Looking across the room at my former High School sweetheart and then realizing we’ve been married for almost 15 years.
16. Dave Essad’s quote that ended in “Mouthwash” is truly an off air story, and that his faith in the religion of Sarcasm is as strong as mine.
17. Realizing that Margo was more prepared for our reunion than the planning committee. (She graduated in 1992)
18. Rachel has a daughter that has already graduated.
19. Camp Tamarack was nothing compared to what fun Joel gets to have at his camp, and that my title as Creative Camp Counselor at StormFrog, has in fact, nothing to do with a real camp.
20. Wiley Elementary wins with the most in attendance at the nights end. 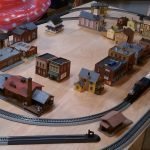 All Aboard the Memory Express.My Marsupial, My Sweets, Notes, Thoughts & Personal Expressions