All Aboard the Memory Express.

I like spending time with my Father. It doesn’t happen often but when it does I cherish it. I think about him at least once every day but spending a block of time together is something really special.

The reason for his visit this time was the holiday train track for under the Christmas tree. This weekend I have been look forward to for years, scratch that… decades. Ever since I can remember I have wanted to make a track for under the tree. We just never had the space. Growing up my Father had made one. His was an HO scale set complete with roads, streetlamps, multiple tracks and houses that were colorfully lit from beneath. Some of my favorite holiday memories are traced back to the times I spent playing the engineer, robbing the local bank and having the sheriff come in to make the rescue while the ‘ol blue Norfolk and Western circled the city. The two pictures to the left are old Polaroid photos that I found that detail my Father’s preliminary track layout. I didn’t realize I had these. Coming across them last week in two separate locations within my own collection of train parts and pieces was the Geraldo Rivera find of the century. These two photos have not been together in a very long time. (Time to frame them and give them their proper artistic due.)

As for my track, Santa has been bringing us one HO scale house each year in anticipation of having the space to have our own track someday. After the season, the kids and I would sit around the kitchen table and over the course on a couple nights would build the house. Since Joey is 14 we have a city full of character. My brothers John and Dan and I, divided my Father’s houses up a few years ago that were on his track. So i have 5 additional houses, scattered within my own that makes our final city.

Tonight was fun. Laying out the track parts and arranging the houses. Spending time with Dad in my garage while spending time with Joey and Rebekah as they helped. They didn’t know Grandpa was there with us, and that’s fine. They don’t think about him like I do. I don’t expect them too. I know my Father was smiling when Rebekah went house by house asking “Is this one that Grandpa built?” What about this one? And this one?” Each time I pointed out the next Grandpa house, she’d pick it up and inspect it closely. I liked her comment when she said that “Grandpa was really talented. I wish I would’ve know him” I responded, “Yes he was Rebekah, yes he was. He would’ve loved you. And he would’ve spoiled you rotten.”

I’m glad we have the space in the new house to finally make this track. when I complete mine it will be an HO scale set complete with roads, streetlamps, multiple tracks and houses that are colorfully lit from beneath.

Wait, Did You Say a Rat?My Sweets 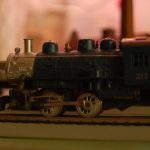