For Love of The Game

Oh my I love baseball.

I love baseball for it’s rich history. It’s design and strategy. I love that every play is a potential lesson in character building. Every out or base hit a learning opportunity of sportsmanship and team play. I have been a coach or assistant coach for my son Joey’s baseball team for the past 8 years. This will most likely be his last year of organized baseball, and for me it’s bittersweet. The realization that another chapter of parenthood with Joey is coming to a close is a hard pill to swallow. I have been cherishing each moment of this season, and nothing was more exciting than tonight’s game.

Tonight’s game will go down for me as the pinnacle game in my eight years of coaching. The ultimate highlight. This game will be talked about, romanticized, and remembered for years, and it’s games like today that reassure me that baseball is the greatest sport in America.

Today we were playing the Yankees. A pesky full throttle team that never lets up. Our kids today were ready, or so we thought. The top of the first inning was a comedy of errors. Literally. Four errors leading to four runs. We had our first ups and went down “one, two, three”. The second inning for the Yankees was a continuation of the first for the Orioles. Walk. Walk. K. Base hit, Error, Error. Overthrow. Base Hit. Walk. In an instant we were down 10 to zip. Nothing. Goose egg. The kids were deflated, frustrated, and snippy. Okay so were the coaches, and I totally felt their pain. The Yankees were pouring it on, not by good play or solid base hits, but by capitalizing on mistakes that we were making on the field. It’s one thing to get beat by a better team. It’s another to get beat by yourself. After three innings were were looking down the bat barrel of an 11-1 deficit, and frustration was at an all time high with the team. Buck, Steve (the other coaches) and I, sat the kids down on the bench before we took our turn to bat in the bottom of the third and I proceeded to speak to the kids like I have never spoken to a team before. I think this was the jist…

“Orioles! Everyone on the bench! Pay attention and listen! Baseball is supposed to be fun. I don’t see any smiling faces on this team right now. We have 12 guys on this team… we only need 9 to play so if you want to sulk and give up, them by all means leave the bench now. (uncomfortable pause) But we are not giving up today! Myself and the coaches are voulunteers. We don’t get paid to be here. We’re here because we love this game. We love this team, and we know you are better than what we see on the field right now. In fact, your parents have paid to have you here so let’s focus! Let’s have some fun, and let’s not look back at the first three innings and only look ahead. Let’s play solid head’s up baseball. Let’s stop the bleeding and let’s get back in this game.”

Thankfully no player took me up on my offer to quit. Not sure what I would have done had one of the kids called my bluff. The next three innings were as I was expecting. We played better defense, hit the ball, sole bases, and played solid fundamental baseball. And by the time we got up at the bottom of the sixth the score was 14-3. I felt good about our effort. I was proud of the kids and how they bounced back after probably the worst three innings of baseball I have seen in awhile. Now, one of the reasons why I like baseball so much is that in order to win you need to make all the outs. In the major leagues teams are required to get all 27 outs in a nine inning game. There’s no running out of a clock. No playing keep away to preserve a lead. Baseball makes you accountable to do your job if you want the win, and I like that. In little league games, teams play seven innings instead of nine, each game however does have a time limit. By the time we got up in the bottom of the sixth our time limit was very close to expiring and the sun was starting to disappear behind the treeline. I had already planted the seed with the umpire that if we had the opportunity to start the 7th inning before 8:25 that I wanted to play. Despite the 14-3 deficit. I wanted our kids to finish out the game and not give up. We did score one in the bottom of the 6th to cut the lead to 14-4 and we started the 7th and final inning.

This is how the bottom of the 7th started for our team: Base hit. Double. Walk. Base hit. Walk. Five kids up—three runs in, and one tough call at third placed us with one out and 6 runs to make up. The kids were standing on the fence, cheering, they were vocal, and more importantly, they were smiling with rally caps on. The next five kids. all got base hits. Let me stress that again. THE NEXT FIVE KIDS ALL GOT BASE HITS. Each and every hit was met with more cheering and smiling. These five hits accounted for another 5 runs. In a flash the score was 12-14, we still only had one out and we had the tying runs on base. The go ahead at the plate. After a fielder’s choice play and one base hit later we were only down by one run. Two outs. The tying run on third. The stress was amazing. My heart was pounding out of my chest, and my voice was hoarse. My kids were on their way to making the most unbelievable comeback I have ever seen. One hit, or one passed ball ties this game. Ties it! The drama was thick. The tension was high. However, the game ended with an Oriole strikeout and a Yankees win. The Yankees finally got us out but not before surrendering 9 hits, 2 walks 9 runs and the most exciting half inning in all of my 8 years of coaching. Final score: Yankees 14, Orioles 13.

I was astounded. So impressed of my team for for not quitting. So proud that Buck, Steve and I were able to coach this game. So thankful for the parents sticking with us and not revolting because we were stressed too. So happy I insisted on playing that last inning.

My kids left the field with their heads high, their spirits up, and despite the loss they left the field feeling like winners tonight. This game was a lesson in character building. It was a learning opportunity of sportsmanship and team play that i relish to share with my grandchildren some day. Even though we lost, the kids learned a valuable life lesson. They learned to never give up, because you never know. You just never know.

Oh my I love baseball. 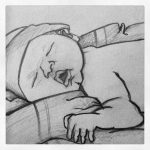 M is for Mature, or Maybe.My Marsupial 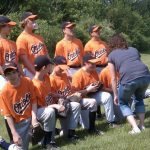