Last Thursday night was a great example of the Disney song, It’s a Small World. I will try my best to explain a small portion of this night, and I apologize now if it does not seem to translate.

I need to start by saying that StormFrog, the digital company I work for, is fortunate to work with some pretty amazing companies. The newest of which is a Cleveland, OH based company. We have logged many hours on I-90 meeting with our client. The marketing director knew I had spent some time living in Michigan, specifically the Detroit area, but we never did get a chance to talk about the connection. I myself was born and raised.

She and her coworker came to Rochester, NY for an all day Friday kick-off meeting and while in conversation over dinner Thursday night at the Wegmans restaurant, Next Door Bar and Grill the subject of our Michigan connection came up. She told me she and her husband lived there… A time in Ann Arbor, another stint in Birmingham. I shared that my Aunt JoAnn lives in Birmingham and she casually mentioned that her father-in-law worked as a columnist for the local paper and that overall she enjoyed her time in Michigan. Me a former paperboy asked her who her father-in-law was and I was surprised at her answer. “He was Joe Falls” She says… “Um, wait” I respond, “Joe Falls was your Father-in-Law”, “Thee Joe Falls? The legendary columnist and reporter for the Detroit News?”

I was stunned. Now as a former paperboy I used to read the paper before I delivered it, and the columns of Joe falls, Mitch Albom, and the daily box scores of the Detroit Tigers defined my summers and after school routines. (Notice I never said I was a good paperboy).

We spent the next ten minutes reminiscing of Ernie Harwell and the Detroit Tigers, Tom Monahan, the Unions, the paper strike, and the small patch of Tiger Stadium field turf my Uncle Joe ripped out of the ground when he and thousands of other fans stormed the field after the Tigers won the World Series in 1984. Planting that small patch of grass in the back yard of my childhood home solidified my love for a city, a baseball team. Frankly for baseball itself. During our conversation I was a kid again. Recalling a time when life was care free. Time spent at my Grandma Mayernik’s house, listening to the Tigers and Ernie Harwell on the radio and drinking Pepsi. Man those were good times.

And her Father-in-Law was Joe Falls, former Detroit columnist who saw everything first hand. Oh the stories he must have had.

Now Pepsi is replaced by 2 Red Stag Manhattans. Care free summers are replaced with responsibility and deadlines. While I wouldn’t change a thing it was nice for a short moment to come back to being 11 years old. To be a fan again. To be awestruck by a man who I never once met, but knew what he stood for because some 25 years earlier I used to read his communications of the written word. And now I get to work with his Daughter-in-Law. Good times—potato salad. The last time I was in Tiger Stadium was on May 15th, 1999 and it was my Father-In-Law’s birthday that day. 1999 was the last season before the new Comerica Park opened in 2000. The photo at the top of the post is the view from my seat, and this picture hangs in the hallway leading into the office in my house. As irony would have it, the Cleveland Indians were in town. (Cleveland beat the tigers 12-7, boooo).

And though I won’t know for sure, I bet Joe Falls was there covering the game.

It’s a small world after all… 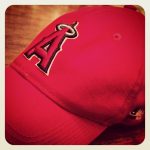