The last week for me was very taxing. Long hours, new business stress, long flights, oppressively hot temperatures, and in a constant state of “on” as a new business owner while in Phoenix at the ADMERICA! conference sponsorded by the National AAF. If not the time with close friends, I think I’d be in a looney bin.

I left Phoenix early Sunday morning with a heavy heart, and mental fatigue. On my first flight, the plane experienced major turbulence. The “Drop 50 feet in 1 second, amusement ride, knock you out of your seat” type turbulence that elicits July, 4th crowd-like reactions. While people were ooing and aahing, I was secretly hoping for the plane to crash. #truestory.

However, we landed safely in Atlanta and during the 3-hour layover, I overheard a paged solicitation over the loud speaker for a multi-faith service in the chapel at 2pm. Now, this is something I would normally not hear, nor ever considering going to, but i think someone was speaking to me. And no, it wasn’t the guy serving me my change at Arby’s. If there truly is a God, then he knows my faith has wavered.

2pm rolled around and I strolled into an room with a dozen or so empty chairs with one exception, one was taken by the minister. His name was Will (I thought, seriously your name is Will?). With my already heavy heart I walked up to the front table where the Bible was located. It was open to Psalms and the third one I read struck me hard. I took a photo of it and it’s above.

Psalm 51
Have mercy upon me, O God
According to your lovingkindness;
According to the multitude of Your tender mercies,
Blot out my transgressions.
Wash me thoroughly from my iniquity, and cleanse me from my sin.

While, right now, I do not feel worthy of forgiveness, I do very much seek it. Minister Will came up from behind me and asked me my name, where I was from, where I came from and where my final destination was. He asked if I had heard the paged soliciation and that I was indeed here for the service (he seemed quite shocked I was there). I told him yes, but that my flight was to board in about 15 minutes. He said, “Perfect, I know just the sermon I will give you today.” Another woman strolled in, her name was Sarah. She was on her way to Colorado and she too was going to listen. And together we sat. A personal audience for Minister Will and his words.

In his readings and with his southern drawl, he spoke of the miracles performed by Elijah and Jesus when it came to healing the sick or bringing people back to life. In his sermon he talked of fairness. What is fair in the world? Why are there infants that die months after birth, and wives widowed with small kids still to raise? And why tragedy strikes sleepy towns in Oklahoma filled with innocent people? He told a story of a funeral he ministered for a teenager and then spoke of the words he tried to use to comfort the grieving family and friends left to wonder why. He spoke of how God answers prayers, and that answers rarely come how we expect. “The lessons of our lives,” he said, “unfold for us in ways that only God himself knows, but know that he loves us, and when we trust in him he will make his answers known and steer us on the right path.”

It was tough to hear, but most definitely what I needed. If only for 15 minutes. After he was done we all left the room and went our separate ways. Each touched by this moment. Solidified by God, and eager to go home to be the company of family. 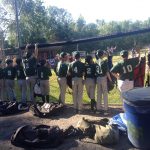