The 75th Ride on the Reading.

I love the game Monopoly. If I had to pick a favorite board game this would be it. Monopoly is the perfect game. Just enough strategy, balanced with luck. I love the game pieces, the colors of the board, the illustrations on the Community Chest and Chance cards. Monopoly has just enough math for me and I love that the playing board is filled with properties that are named after actual locations around Atlantic City, NJ. (However Illinois Avenue was renamed Martin Luther King Jr. Blvd. in the 1980’s and the actual St. Charles Place no longer exists courtesy of a casino.)

Thanks in part to my Brother Dan and his friend Eric this is one game I know far too much about. Property costs, mortgage rates, and the fact that the famed Reading Railroad is pronounced Redding, not Reading. I have played so much I know what properties are the “real” ones you want to get, and when going to jail can sometimes win you the game. If your in the mood for a quick parlor trick, quiz me sometime. I won’t disappoint.

In 1998 Julie and I got a Deluxe Monopoly game for Christmas. The set has wooden, not plastic houses and hotels, gold colored game pieces including a classic train. A sweet spinning holder for the property cards, and a banker’s tray to keep the cash at the ready. More importantly the board has a dark purple Mediterranean and Baltic Avenue. Unlike the brown of the new sets of today. On January 1, 1999 we played our first game. Julie was the boot and I was the racecar and Julie won. I know this because for that game, and every game since, I have written on the underside of the box lid in a white Prismacolor pencil who played, what piece they used, what the date was, and more importantly who won.

Thirteen years later, game 75 was played last Sunday, New Year’s Day, 1-1-12. We had had several opportunities to play this game, We had the chance to play with Dan and Linda, My Mom and Norbert, Julie’s sister Joanne, and even our friends Mike and Rachel. For one reason or another we opted to not play and Game 75 was held. Held until Sunday.

This was the cliff notes version of game 75:

Julie was the thimble, Joey was the train, Rebekah was the dog, Aaron was the racecar, and I was the old utility van. Rebekah made it around the board first and ironically bought the Mediterranean Ave as the game’s first property. Aaron spent a lot of time in Jail, and I mopped up free parking and landed on Illinos Ave seemingly on every pass around. Aaron was out first, even with a saving move by Julie. She was next, then Rebekah setting up a showdown between Joey and me. In the end this game saw at least two fatal moves, mentions of the “full color spectrum, and 3 house plateau”, and ended up with Joey as the winner.

I’m glad my family likes Monopoly. I’m glad that as a family we can play games that don’t end in arguments. I’m glad that for 2 hours or so we can just worry about getting that last orange property versus a high score on some electronic device. In the end, this game was a worthy 75th, and one that I know we’ll all remember vividly when we pencil in #100, #125, or even #150. 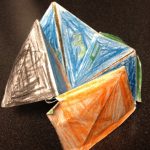