We all have an origin story.

And I shall tell you the one belonging to the monkey Ekky Kins for reasons that’ll become clear if you continue reading. This is my promise to you: The end of this post will have you shaking your head in bewilderment. The finale will leave you stunned, and while I tow the line of completely overselling this posts content, I am confident that it will not disappoint. I still have a hard time believing myself, and I was there.

Trust me: Hollywood doesn’t come up with stories like this.

There’s this stuffed animal.  His name is Ekky Kins.  For the record it’s pronounced E-Key not Eck-e and Kins is pronounced, well… Kins. He is not just any stuffed animal. He happens to be my favorite childhood stuffed friend and the secret source of all my creativity.

Now, I had considered taking about him years ago, but the topic of Ekky really fell off the radar.  See, I figured that a grown man talking about his childhood stuffed animal might be a tad too revealing.  I know I’m an over-sharer and chalk that up to me being a Sagitarrius (Not sure if that’s entirely true but I’m going with it).  However, recent events have caused me to talk about him in great detail.

Ekky is a stuffed monkey that:
a. I would talk too as a child.
b. Would respond in a high pitched squeaky voice.
c. I’d sleep with at night for an uncomfortable amount of years.
d. Has his own personality, likes, dislikes.  He gets angry when people compare him to Curious George, gets sad when he’s thrown outside onto the grass.
e. He’s very compassionate.
f. He’s a great listener.
g. Builds wooden benches underneath the bed for the other stuffed animals in the house to use and enjoy.
h. Yes is a stuffed animal.

But he’s is more than just a stuffed animal.  He’s unique.  He has a soul.  He is me—and I—him. He is my Father’s love in cloth and stuffing. His name is Ekky Kins, and his origin story starts in the early 80’s. As the lore goes, my father upon entering a toy store somewhere in the Detroit area was crowned “The 1 Millionth customer.” His reward for such a prestigious designation was his choice of one of the many stuffed creations that lie in wait on the shelves. He looked over all the stuffed animals and after much deliberation chose a monkey donning green overalls and a hat complete with a white pom-pon on top.

When I was in elementary school, The bus dropped me and my brothers off at the top of the only dirt road in the subdivision and we would have to walk down the street about a quarter mile to go home. Every so often my father would come home at the same time from his job as an electrician. On the day my father was the “1 Millionth Customer” was one of those days. As he drove up to me and my brother Dan, we were about 5 houses from our house.  He slowed his red Chevy pickup down to meet us and through the drivers side window my father showed me this stuffed monkey donning before mentioned green overalls as if to say “Na Na, look what I got.”  He then proceeded to speed away leaving Dan and I in the middle of the dirt road surrounded like Pig Pen in a cloud of dust.  I ran the rest of the way home, full speed—back pack and saxophone case in tow.

My father gave me that monkey that afternoon and his name quickly became Ekky. All night and the following weeks he and I played.  “Eee eee eee eee!” He’d say, and off we’d go. After awhile he learned English and the high pitched speaking monkey has been talking ever since.

He’s the reason I’m imaginative. He is the reason why I crave creativity. He’s the reason I can sing in falsetto. He’s the reason that at times as a child I could retreat into a vortex while I battled my inner drama. From the time I got him he went everywhere with me. To Grandma’s house, on family vacations, and even to Europe. As a child Ekky was always found tucked under my arm as the nighttime skies grew darker and darker revealing their glistening stars above. Even in 2013, Ekky made the trip with us to Michigan to help celebrate Christmas. On Christmas Day I received a present from my Mother. It was a small unassuming box that shuffled when I shook it.  Inside was a card and the single most unexpected gift I have ever received. It was a pattern and a complete stained glass window of my childhood stuffed monkey Ekky.

The card my mother gave me reads as follows:

Dear Joe,
I had an artist finish this piece of stained glass that Dad drew of Ekky. This is his original pattern; he never got to finish it.  However, he did cut out the two arms and the chest (where the heart is).

When you look at it, remember he is always with you. Hugs from heaven.

For all those who may not know my father died in 1989. Unbeknownst to me or my mother my father had plans to create a small stained glass window of Ekky for me as a present. He created a pattern, indicated colors and even cut out three pieces.  I don’t know when he did this. Neither does my mother,  All we know is that he didn’t complete it before he died. So many factors could have prevented this gift from happening…

If he doesn’t choose the cute monkey in green overalls. There’s no Ekky.

If there’s no Ekky, there’s no need for my father to draw up a sketch for the stained glass.

It there’s no Ekky, there’s no opportunity for this paper sketch to survive a major house fire that brought my childhood home back to the studs.

If there’s no Ekky, there’s no need for the 3 cut glass pieces to survive a major purge right before a second story addition was put on my mother’s house.

If the three random cut glass pieces break, are misplaced or are discarded as junk. This gift does not happen.

If those three random cut pieces of glass are not found by my mom in a shoebox on a random weekday afternoon, there would be no gift of stained glass.

And as such, this gift, is no longer just a gift. It is a treasure. A treasure unearthed after 30 plus years of unintentional secrecy, with more value now than logically possible. Better than any time capsule, this gift from my mother (and father) is a treasure that I will hold dear for the rest of my days.

Happy Holiday’s… shaking your head yet? 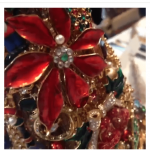