On May 5th, 2000 my oldest son Joey turned two and a half.  That was a big deal.  For me, two and a half symbolized the last of the baby age milestones.  For all those who have children, the early milestones of three, six, nine, and twelve months carry special meaning.  After two and a half, it’s all about the birthdays, three, four, five and so on.  So when Julie and I told Joey that he was turning two and a half, it was a special day.  Joey promptly replied with “If I get cake on my birfday… I should get cupcakes for my half birfday, because cupcakes are smaller that birfday cakes.”  Thus a new family tradition was born.

Now, every year on our half birthdays our family celebrates with cupcakes.  No presents.  Just a reason to eat the tasty treats, and make someone feel special with some extra attention for making it another 6 months. Over the years we have shared this story with friends who have inquired, and some now even celebrate them in their own households.  Pretty cool since this idea came from Joey. What would be your cupcake birthday?

Maybe that day back on May 5th was Joey’s ploy for extra sweets.  Probably so, but what Joey inadvertently gave us was a family tradition that will live on long after me, Julie and even he, is gone. 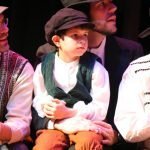 Something Happened On The Way To Act Two.My Marsupial, Notes, Thoughts & Personal Expressions