I did something today I have never done before.

I read a book cover to cover
in one night.

The magnitude of this event was smacked clear when Aaron, my youngest looked at me and with blatant honesty and said, “Dad, you’re actually reading a book? Really?” Normally I’d chalk his response up to his highly developed sense of sarcasm, but he was totally serious. He’s right, I don’t read. At least not recreational reading. Most of my in-progress book are marketing, creative, or advertising focused. I sneak a few pages here or there mostly on my ipad Kindle app. I have 3 or 4 books that I could say I am “in the middle of reading”, but have not finished any of them. I’m not opposed to reading. In fact, I quite like it. I just don’t have the time. So finish a book in one day? Um, no.

(To steal a line from @gerlock: I swear I don’t even know who I am anymore.)

The book I read tonight was Mitch Album’s For One More Day. It’s one part ghost story, one part baseball, and lot of parts reconciliation that details the life of Chick Benetto. On the day of his failed attempted suicide he spends one day with his mother that had been dead for almost a decade. It’s a fast read, gets you thinking about mortality and the choices one makes during a lifetime. The book had me in tears during some sections more often than I care to admit. Sure I would love one more day with my Father, or Grandma Mayernik. I am not sure what I’d say, or what they’d think about the choices I’ve made during my life, but would love one final day. My friend Courtney gave me the book just this afternoon. She knows that I’m a Detroit guy and that Mitch Albom is a Detroit Columnist, she knew I’d like the book and she was right. Courtney had no idea that I was just thinking about this book a few days earlier. Let’s just say the book was already top of mind.

…and for once I could not put a book down. Yep I read a book cover to cover.

(I don’t even know who I am anymore, and maybe that’s the point)

I Get It, I’m TallNotes, Thoughts & Personal Expressions 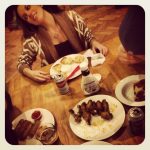